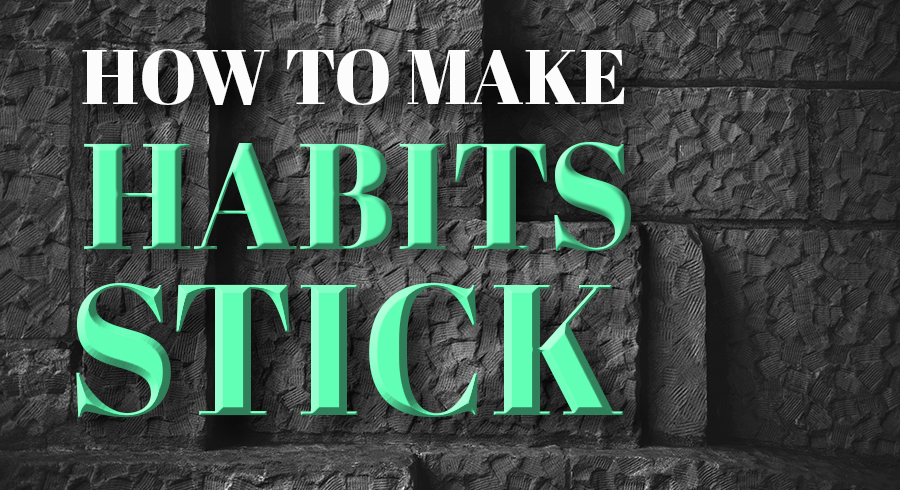 The Not So Common Way To Make Good Habits Stick

I recently read the book Atomic Habits by James Clear and this concept is from just one of it’s chapters. I recommend it highly, it's beautifully written and is packed with actionable advice.

When we look to change goals we often start with an outcome, for example:

We then build habits around accomplishing this outcome like avoiding social gatherings where alcohol is prevalent, chewing nicotine or doing 50 sit-ups per day.

James makes "Clear" this is not the most effective approach to our new habits. He explains a better approach which I'll share here.

A new habit has 3 layers to it, like an onion. The first is the outcome (The result we want), the second is the habit or process (what we’ll do to get that result) and the third is our identity (what we believe about our self in relation to the habit).

And when we approach a new habit, we should begin with our identity in order to cultivate a belief that reinforces the new habits.

“When it comes to building habits that last, when it comes to building a system of 1% daily improvements. The problem is not that one layer is better or worst than another. All layers of change are useful in their own way. The problem is the direction of change, many people begin the process of changing their habits, by focusing on what they want to achieve. This leads to outcome-based habits. The alternative is to build identity-based habits. With this approach we start by focusing on who we wish to become.”
– James Clear

He goes on to say that most people don’t even consider a change in identity. They merely set an outcome (I want to be skinny) and create a process by which to achieve that outcome (If I workout and diet, I will be skinny). They don’t commit to the new identity that comes along with the new goal and when resistance inevitably arises, they fall back on their old beliefs (I’m not skinny and fit) which don’t support the habits and the whole thing falls apart.


Instead of starting with an outcome, start with the identity that will support that outcome. For example, if your outcome is to be fit and skinny, the identities that would support that might be I am someone who loves to workout, I am a runner, I am a health cook and eater. By starting with our identity, we can derive the habits we must consistently do to be that person.

What would a runner do today?

What would a healthy person choose to cook?

What would a healthy eater choose on the menu?

This may seem like a small change, but it is significant.

Martin Luther King Jr, for example, fueled a movement that changed the course of history based on his ability to convey a belief in civil rights through nonviolence and civil disobedience.

“A system of democracy is founded on beliefs like freedom, majority rule and a system of equality. The system of dictatorship has a quite different set of beliefs like absolute authority and strict obedience.”
– James Clear

This reverberates across many areas of life and the principle remains true on an individual level, national, and organizational one. A corporation with a strong and clear identity (mission), acts with a purpose and efficiency. An individual with a strong belief in their purpose will endure much more than one without.

When we repeat stories to ourselves and thoughts in our minds, they cultivate beliefs and these beliefs build the foundation on which our identity is set.

If the identity we have created does not align with the behaviors we seek, then our new habits are as good as a sandcastle next to a rising tide. If we are successful in aligning our identity to new habits, we stand a better chance at solidifying change.

Imagine the difference at a social event between 2 people that are not drinking. When asked if they want a drink, the first says “No thanks, I am trying to quit” and the second replies with “No thanks, I don’t drink”. Even if they’ve both quit recently, the latter answer has much more conviction.

“Behaviour that is incongruent with beliefs, will not last. True behaviour change, is identity change.”
– James Clear

Change at The Core

Now that we have this new insight, how can we make the proper adjustments to our identity so the new habits stick? I see three methods for accomplishing this:

The most practical and effective is your habits.

Every action or habit you take toward your new identity is a vote toward that identity. Reinforce your identity with your actions. The key here is to start small but be consistent. If you want to be a writer, write everyday. The size of your target is less important than the daily consistency.

“The more you repeat a behavior, the more you reinforce the identity associated with that behavior. In fact, the word identity was originally derived from the Latin words essentitas, which means being, and, identidem, which means repeatedly. Your identity is literally your “repeated beingness.”
– James Clear

Do not be afraid of starting incredibly small and making tiny gains at the beginning. If you maintain the habits, momentum will grow exponentially because the 3 levels (outcome, habits, and identity) together create a feedback loop that reinforces and strengthens every area of the process.

Your habits shape your identity which in turn supports your habits. The layers fuel themselves and soon the process will be so natural to you, it will be effortless.

The second and third methods involve continuously nudging your attention toward this new identity with affirmations and visualizations.

These exercises play a significant role in adjusting our beliefs but we rarely take them seriously.

Writing out affirmations that reinforce the identity we are striving for and visualizing the actions and outcomes of that identity will support the process pictured above and skyrocket it’s success rate.

Not only does the research support them, but the 2 exercises are used by business moguls, athletic champions and great leaders all over the world who endorse them.